As I write this, the summer is rapidly approaching! And with rising temperatures and longer days filled with sunshine, most gym-goers find themselves scrambling to improve upon their midsection.

For some that simply means melting away belly fat and achieving a flatter tummy. For others, greater core strength is the primary directive.

However, for most serious lifters (yes, that is you my trusted Muscle & Strength readers), the ultimate achievement is a rock-solid, shredded, and perfectly delineated 6-pack.

Now, while many “experts” in the fitness community might claim that great abs are not manifested in the gym, but rather via diet and cardio, let me assure you that to present a truly impressive abdominal wall, each “brick” must be maximally developed (both thick and deep), which will occur only through hard training.

With that in mind, here are five of my favorite exercises meant to do just that! 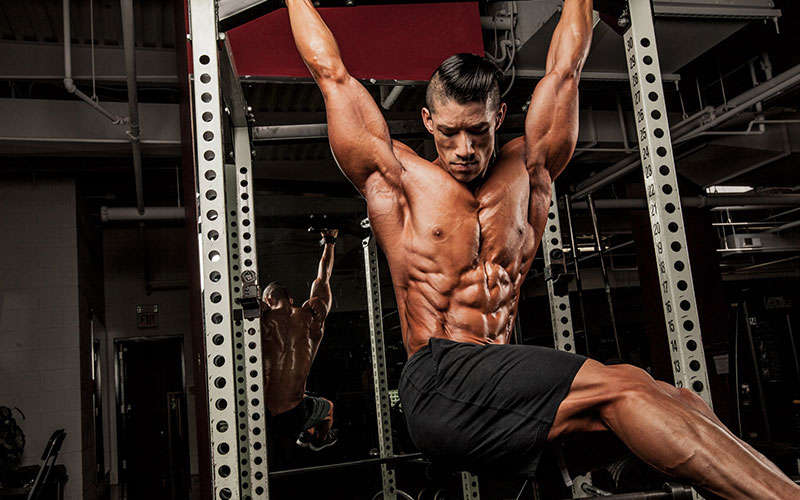 Stand in between a set of parallel bars and lift yourself into what would be the starting point for performing dips. While holding your torso locked in this position raise your legs to just above parallel by flexing the hips.

Hold at the top for about one second and then slowly lower your legs back down while keeping the abdominals tight throughout. Tip – Try your best not to focus on your hip flexors, and think to yourself, “Lift with, and contract, the abs.”

Get a pair of abdominal straps and hang them from a pull-up bar. Place the upper arms in the straps and grasp them securely. With a slight bend in the knees, begin lifting the legs by flexing the hips.

When the hips are at full flexion, raise the knees higher by flexing at the waist. When the abs are fully contracted, hold this position for a full second before slowly returning to the bottom position. (Note: If you do not have access to abdominal straps, the same movement can be performed by simply hanging from the bar. If possible, use wrist wraps to reinforce your grip).

Sit down on an abdominal incline bench set between 30 and 60 degrees, making sure to secure the feet/ankles under the pad before lying back into the starting position. Have someone hand you a moderately weighted BB, which should be held with an overhand, shoulder-width grip and positioned at arm’s length over the chest.

Flex at the waist to raise the torso while keeping your arms (and BB) locked in position. Do not allow the lower back to rise off the bench. Squeeze the abs hard at the top for a second or two before lowering carefully back to the starting position. Tip – Pick a spot above you on the ceiling and remain fixated on it throughout the set. Pretend the goal is to “push” the BB to that spot on every rep.

Position your hips back and head up, so that your spine is straight at the outset of the movement. Keeping the hips stationary, flex at the waist (think of it as curling the torso) so the elbows travel down and inward toward the upper knees. Hold at full contraction for one second before slowly returning to the top.

With both hands, grasp a stirrup handle set at about shoulder height on a cable pulley. The far hand should be placed over the other with fingers interlocked. Facing sideways to the weight stack, step away from the pulley until near arm is both horizontal and straight.

With the feet spaced just beyond shoulder-width apart, bend at the knees slightly and lift near heel off the floor, resting on the ball of the foot. While keeping the arms straight, rotate the torso to the opposite side (across your body) until the cable makes contact with the shoulder.

Hold this position for a moment, and then return to the starting position. Tip – Attempt to initiate the movement by using abdominal/oblique power and not by pulling with the arms.

**Perform day 1 on Monday, day 2 on Wednesday and day 3 on Friday when going after max abdominal development.

Ok, so your body fat has now hit the single digits and you are in the gym hitting abs 2-3 days per week, but yet, your midsection looks nothing like those “buff dudes in the magazines.” Let’s take a quick look at a few possible reasons why this is the case.

Not Enough Resistance: Abs are muscles just like your chest and tris, so why not train them in a similar manner? Doing sets of endless reps of leg lifts and crunches are not going to build jaw-dropping abdominals any more than bodyweight push-ups will develop an Arnold-like chest. Thus, you should not be afraid to perform weighted abdominal exercises that limit you to just 12-15 slow/controlled reps if you really want some deep “bricks” in your midsection!

Quick/Short Range Repetitions: If there is any muscle group that should be exercised with slow-paced, meticulously performed reps it’s the abs. Pay careful attention to achieving a full range of motion from stretch to contraction, making sure to get a tight/intense squeeze at top. Fast/short reps will do little to overload the abs and will more likely result in injury and/or inferior results.

Lack of Intensity: So many gym rats are working under the false notion that all it takes to create a truly jaw-dropping 6-pack are a few easy sets of crunches and leg lifts tossed in at the end of a workout. But like I mentioned earlier, the abs are muscles just like any other. If you really want to carve the kind of stomach that belongs on magazine covers, you have to train the abs with similar intensity to all of the other muscles on your body. Go after it, or you won’t get it!